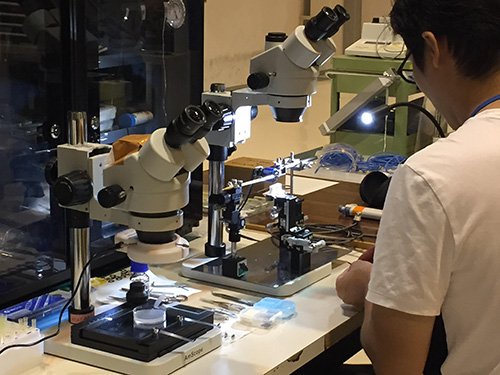 The skeletal muscle has a beautiful layered structure. The muscle has many muscle fibers, which are composed of many myofibrils. These myofibrils are linked in a series of structures called sarcomeres. Sarcomeres are extremely small structures, with a length of approximately 0.002 mm and a diameter of approximately 0.001 mm. However, muscles are formed by numerous sarcomeres linked together, so the contractile characteristics of the sarcomeres are reflected directly in the contractile characteristics of the whole muscle. My research focuses on a phenomenon known as residual force enhancement (increase in force after stretch) using myofibrils linked in a series of sarcomeres. 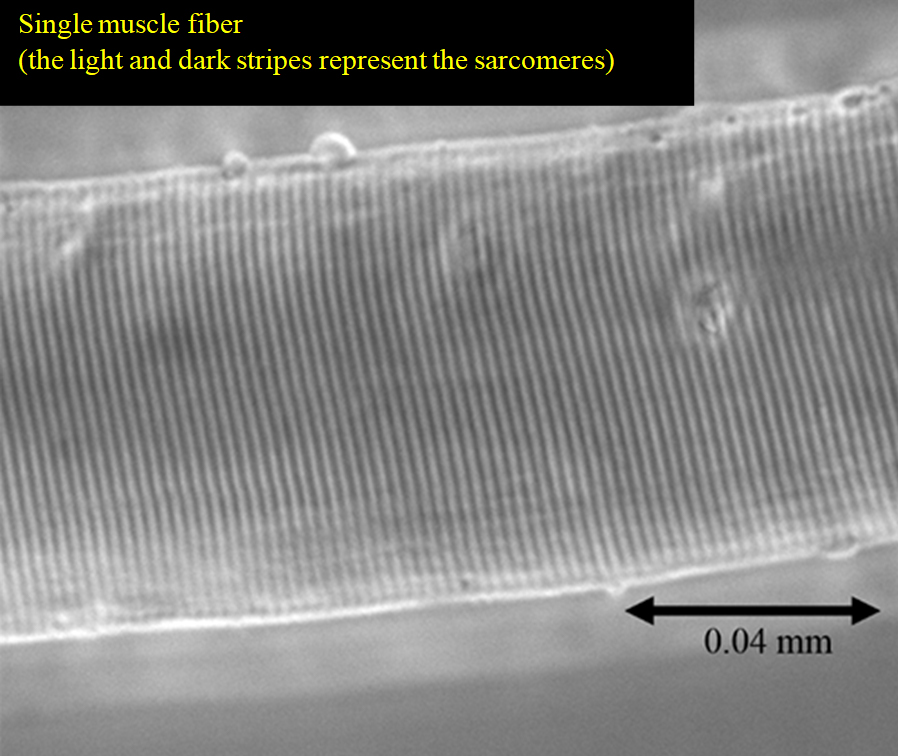 Current research example 3: Visualizing the structure of the skeletal muscle in living humans

If the contractile characteristics of a single muscle cell can be clarified, would it be possible to understand all the contractile characteristics of the whole muscle? Not necessarily. The reason is that not all humans have the same skeletal muscle structure. An easy-to-understand example would be that athletes and body builders clearly have larger muscles, which are capable of exerting greater force than the muscles of ordinary people. One of the reasons for this is that they have more muscle fibers arranged in parallel, rather than having different muscle qualities (the contractile characteristics of individual sarcomeres). Another reason is the differences in structure, which may affect the contractile characteristics of the whole muscle. For example, some African marathon runners seem to have short calf muscles, while their Achilles tendon attached to the calf muscle would be long. Fortunately, the inside of the body can now be visualized without performing surgical (invasive) procedures, by using medical devices such as ultrasonography and MRI. Thus, by using these methods, I am also conducting research on the relationship between the form and function of the skeletal muscle in the living human body. 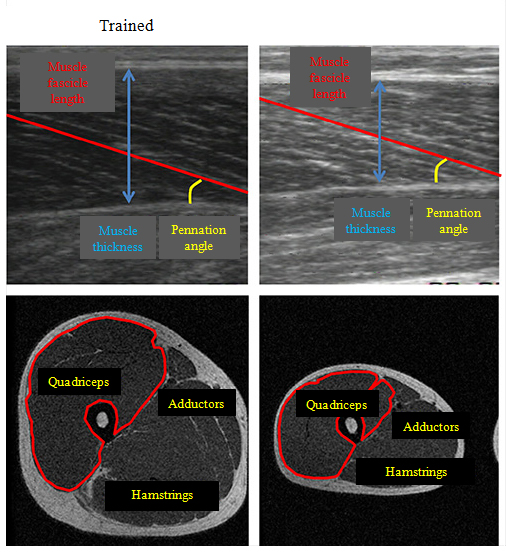 The research topics introduced up to this point have focused on muscles. By clarifying the contractile characteristics of muscles, I aimed to understand the mechanism that generates dynamic movement of human and to apply findings to resistance training. However, to achieve this aim, the nerves that send commands to the muscles must also be considered. For example, even if individuals have large muscles, these muscles cannot be used unless the command from the nerve reaches the muscles. In fact, existing data suggest that even persons who have undergone relatively much resistance training do not fully use all their muscles. In addition, in complex movements where multiple joints move simultaneously, which are widely used for many sport activities, if the commands to the muscles do not switch well within a short timeframe, then sending commands to the muscles may instead become a disadvantage. In these cases, having extremely delicate and complex neural activities becomes essential. Therefore, in addition to the aforementioned research focused on muscles, I am also conducting research focused on commands from the nerves to the muscles (neural activity).